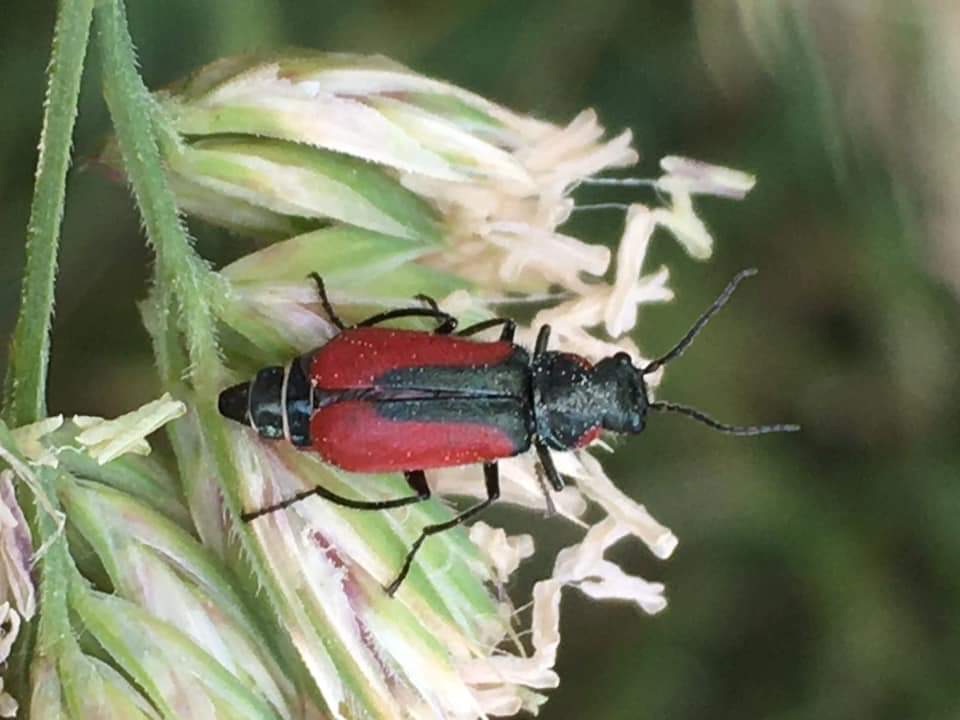 As it is currently very grey outside (on so many levels!) and there is so little to do, I decided it was time to reacquaint myself with some old friends. I say old friends; it’s not like I was once an avid entomologist or that I was ever on first name terms with any of them... but I was once certainly closer to the myriad ‘life in the long grass’, as all children are.

I saw them, I recognised them and I liked them - and I expected I would always see them, as one does with old friends. Perhaps I took them for granted. It would certainly never have occurred to me then that they might be rare or endangered or precious. They were just part of life.

What changed?! As we grow up we do just that, become taller and as such literally more distant from the life at our feet. We lie less in the long grass. We gaze less at tiny creatures making their way up stems and blades, flitting from flower to flower, going about their lives. I suppose we are far too involved with going about our own lives to notice them much in adulthood.

I don’t want to dwell on the terrifying trajectory of global insect declines in this blog, but that is another, undeniable change. Suffice it to say that these days a drive down the motorway in high summer yields markedly less windscreen spatter than in the mid 1980s. Perhaps not the most scientific hypothesis, but it’s enough to convince me.

When exploring the world of invertebrates it is difficult to know where to begin. What a diverse and colourful lot they are! Some sparkle like the rarest jewels, some astonish with their clever mimicry, some just put you right off your lunch. But let’s begin with some of the stars of my garden over the past year. 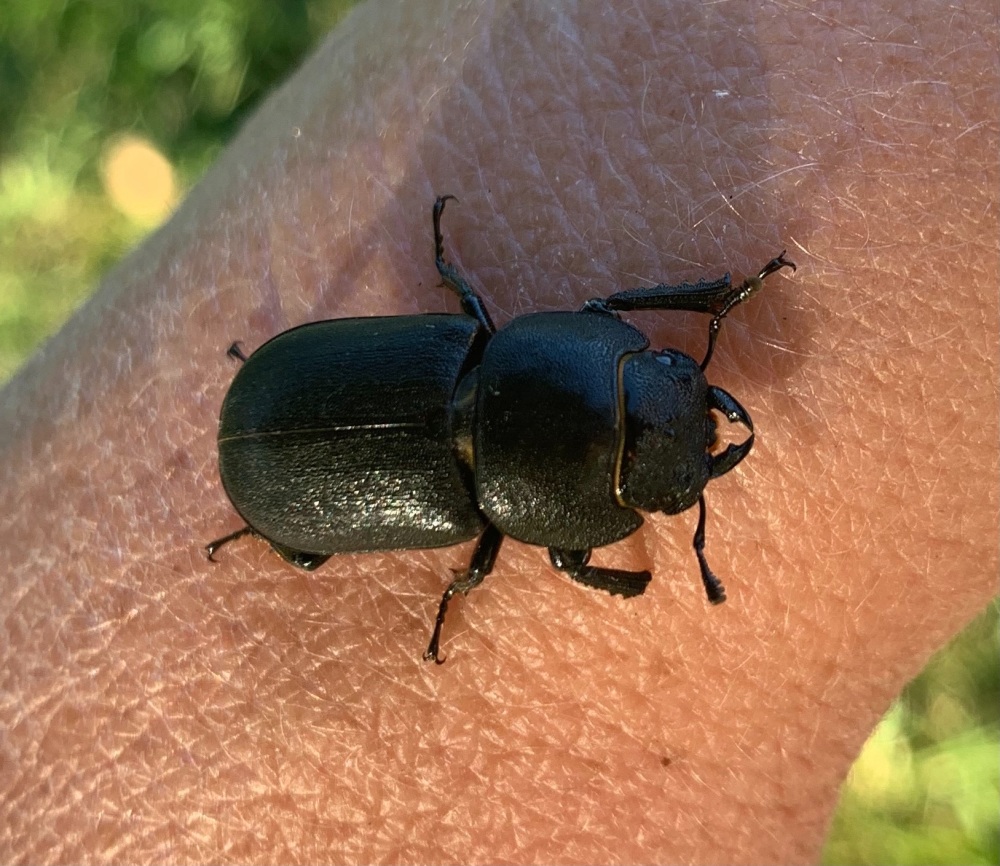 First comes the beetle with my all time favourite name: Dorcus parallelipipedus (or lesser stag beetle). Last winter I moved a decomposing apple tree trunk aside in the orchard and accidentally unearthed a hatchery, discovering eggs, larvae and torpid adult beetles all at once. These gorgeous creatures look like female stag beetles but are more truly black. They spend most of their life underground in the larval stage, eating dead wood. Right now I don’t blame them.

Then there was great excitement in our hamlet in May when my neighbour discovered a colony of scarlet malachite beetles in her garden. My daughter and I had seen one fly past a week or so before, but I couldn’t see it well enough to be 100% sure it wasn’t just a lily beetle or a figment of my locked-down imagination. We soon found more in our garden though and around the green too. Thanks to Sharon Barrett for this brilliant photo.

Malachius aeneus is a soft-winged flower beetle that appears for only three or so weeks in May-June. It is incredibly rare in the UK and only found at a few locations locally. Experts believe there is an association with grassland in close proximity to thatched roofs. They seem to like pollinating on meadow foxtail grass and buttercups. For me the discovery was total vindication in the battle with my husband on ‘how much to mow‘ - and for the large (and somewhat scruffy) piles of hay I leave in the meadow each year after the annual late summer cut. It was the first record of the species in our little hamlet and we will be keeping a close eye out for more next year. 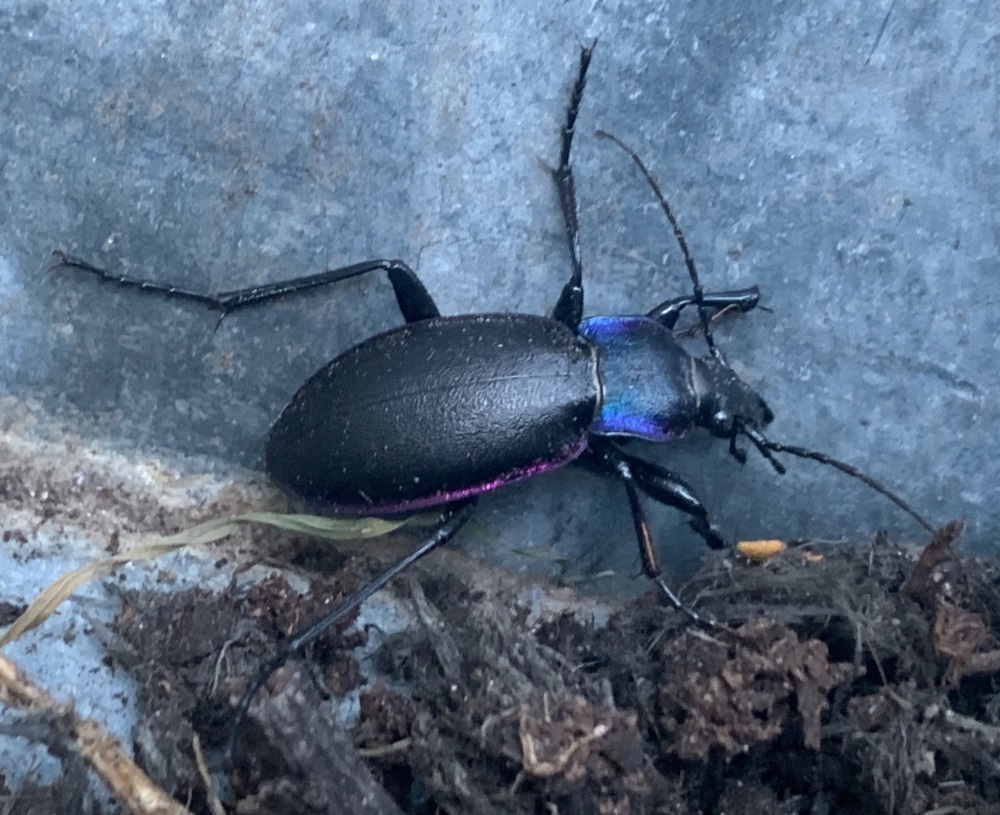 This one is an absolute cracker. Carabus violaceus or violet ground beetle (for obvious reasons). She (or he) looks like a disco diva who got carried away with the eyeshadow. What is more, they are great predators of garden pests so very welcome in my veg garden, which is where we found her. Or him. 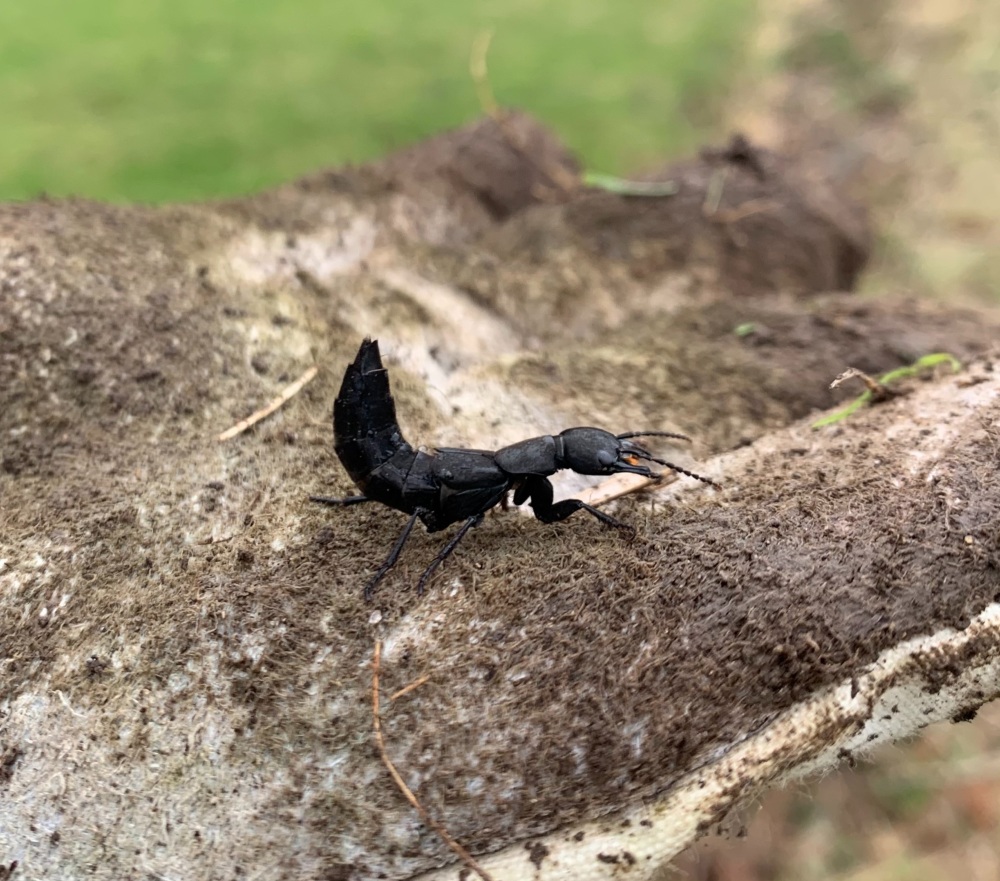 Another fast and agile predator of garden pests is the rove beetle - I believe this one is known as the devils coach horse or Ocypus olens. Don’t ask me why the genus is Ocypus - looks nothing like a dyslexic octopus to me! More like a wannabe scorpion with its habit of lifting its tail when threatened. Although it can’t sting, it has a hard bite, emits a foul-smelling odour and has been associated with the devil since the Middle Ages. Literally a badass! 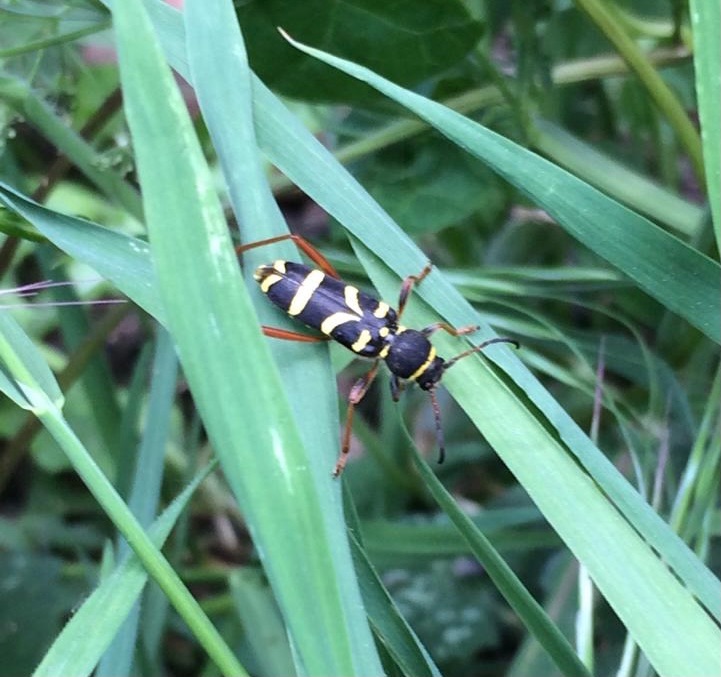 This striking beetle causes much confusion. Is it a fly that looks like a wasp or a wasp that looks like a fly? Or a parasitic wasp? Or some freaky foreign hornet?! No, guess again. It’s a wasp beetle, a beautiful species of long horn beetle which likes trees and flowers and looks a bit like a wasp. We found one on a greengage tree this summer. They are a harmless example of Batesian mimicry. Thank you to Jenny Millege for this great pic. 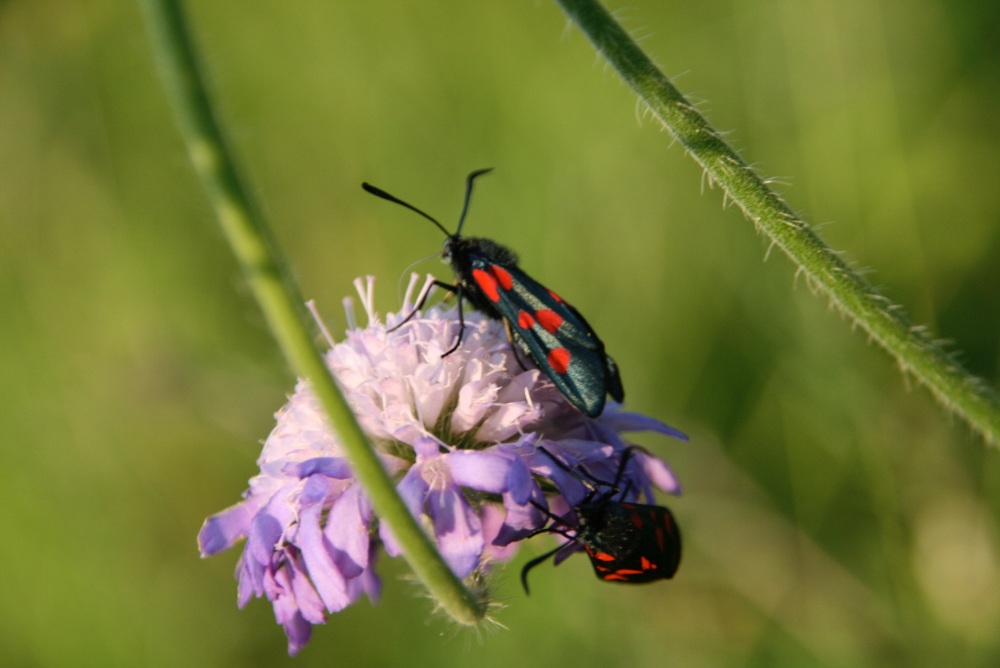 Finally I’m straying onto moths. I have yet to see the five spot burnet moth (pictured above) in my garden (I’m planning on sowing more field scabious as they appear to like that), but I couldn’t resist sharing this picture I took of them in a nearby village. I have seen the black and red cinnabar moths here though, their caterpillars feed on ragwort which is another good reason to leave some in situ each year.

The last incredible invertebrate we spotted last year is the UK’s largest hawk moth, Sphinx ligustri, seen below sitting most aloof and Sphinx-like, newly emerged in June. I will be looking out for the stunning caterpillars on my lilacs this summer - when I’m not lying in the long grass that is. 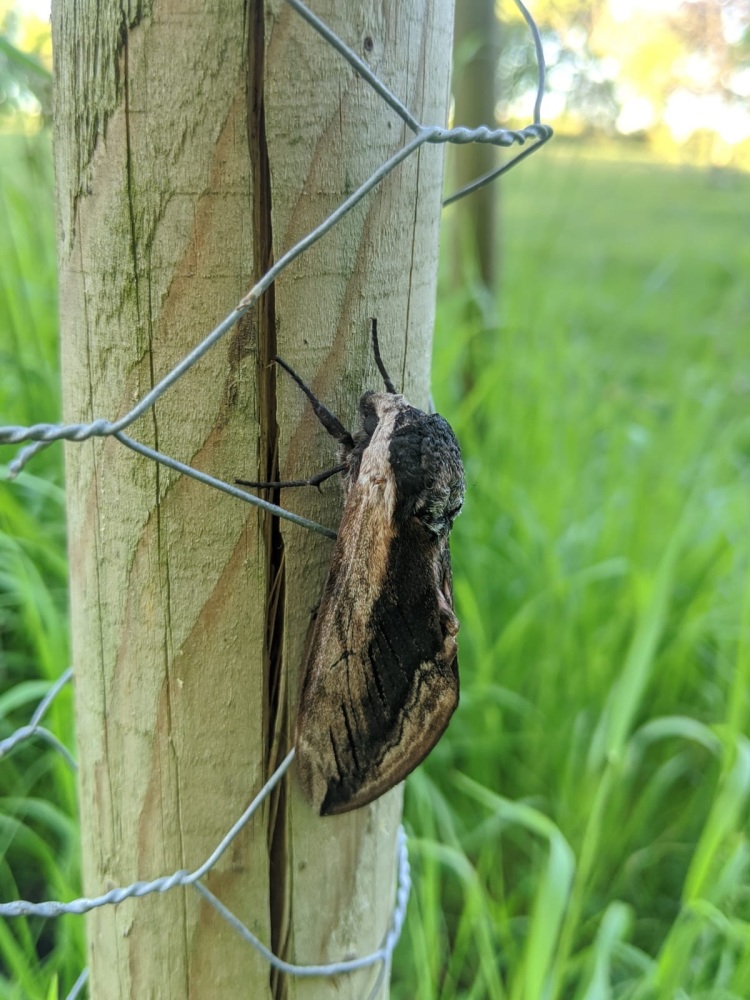 When you think that there are well over 30,000 species of invertebrate in the UK, and take the time to look carefully, you realise that, really, life need not be grey or dull at all.

How I support invertebrates in the garden

Invertebrates really are the lifeblood of the garden. From the worms and springtails chewing up organic matter in the compost heap to the saproxylic beetles breaking down decaying wood. From the many pollinating bees, butterflies, moths and beetles to the aphids which devastate your runner beans (but provide an essential source of food to birds). These creatures and the ecosystem services they provide to your garden can be encouraged and supported in a few very simple ways.

I have several large old log piles dotted discreetly (some not so discreetly!) around the garden, from a variety of different tree species, with more added each year. Beetles love these dry, sheltered environments, especially the wood eating ones. We have six compost heaps and I always leave a few grass/ hay piles every year too.

I am lucky to have two temporary ponds; ponds support numerous insect species including hoverflies and dragonflies and the muddy draw-down zone is a particularly good hunting ground for ground and rove beetles. Even a muddy washing up bowl hidden in a flower bed and kept wet will serve as a ‘hoverfly lagoon’.

Finally, I obviously try to ensure there are as many things in flower (through as wide a range of months) as I possibly can to support pollinating insects. It’s important to plant a diverse range of native plants as native insects have evolved with them and often depend on their specific biochemistry to complete their life cycles.